WASHINGTON, D.C. -- May 17, 2022 -- U.S. Senator John Boozman (R-AR) is the 2022 recipient of the Water Systems Legislator of the Year Award, which was presented by the Water Systems Council (WSC) in recognition of his leadership in Congress in advancing funding and policies to bring safe drinking water to rural Arkansas and rural America. Senator Boozman has authored and shepherded through Congress legislation that has benefited rural families and brought new resources of safe drinking water to low-income Americans.

“Rural Americans could not have a better friend in the U.S. Congress than Senator John Boozman,” said Margaret Martens, WSC Executive Director. “He has dedicated his career to improving the lives of people in Arkansas and across the country. Through our partnership with Senator Boozman, we have been able to deliver safe water to 69 families in Arkansas and are currently working with another 29 families there.“

Senator Boozman has been a key supporter of both WSC and its nonprofit, the Water Well Trust (WWT), and has championed the Water Supply Cost Savings Act, the WIIN Act, and other important water-related legislation.

WSC and WWT have worked with Senator Boozman since 2011, when his office referred a constituent who did not have access to safe water in their neighborhood to WSC’s wellcare® Hotline for private well owners. That call resulted in the first WWT project in Arkansas, giving access to water to six households in Avoca.

One recipient, Mike Frazee, said, “Senator Boozman has helped bring safe drinking water to my home and my parent’s home. He worked with us to get wells drilled through the WWT. At his invitation, I testified before Congress on drinking water challenges in rural America. We educated Congress, which in turn dedicated more funds towards rural drinking water needs. Having running water in our homes changed our lives and we want to again thank Senator Boozman!”

Upon receiving the Water Systems Legislator of the Year Award, Senator Boozman said, “It’s hard to believe, but there are Americans who still must haul water to their homes to meet their everyday needs. We all deserve safe drinking water no matter where we live. I’ve been proud to champion efforts bringing it to more Arkansans and advance policies expanding access all across the country. It’s an honor to receive this recognition from the Water Systems Council whose members are delivering cost-effective solutions to help residents overcome obstacles to water resources in rural areas.”

Tom Drew, Global Business Development Manager-Solar for Grundfos North America, a WSC member company, noted, “I have had the opportunity to speak with Senator Boozman about issues Arkansas and the U.S. face regarding clean, safe drinking water. As an Arkansan, I am proud to have Senator Boozman representing the state of Arkansas and appreciate his passion regarding these issues.”

Senator Boozman will continue to be a leading voice in the U.S. Senate for rural Arkansas and rural America. It is estimated there are currently over two million Americans who do not have access to water in their homes.

“Senator Boozman is the ranking member of the Senate Agriculture Committee, and we look forward to working with him to bring additional resources to rural Arkansas and rural America through the 2023 Farm Bill,” Martens said.

The Water Systems Council is the only national nonprofit organization solely focused on household wells and small water well systems. For 90 years, WSC has been committed to ensuring that Americans who get their water from household private wells have safe, reliable drinking water and to protecting our nation's groundwater resources. For more information, visit watersystemscouncil.org. 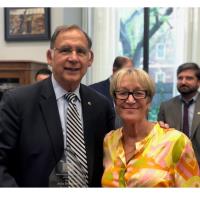